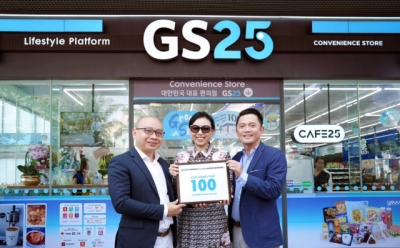 Korea’s representative convenience store GS25, which started as the only Korean native brand’LG25 Kyunghee Store’ in 1990, opened its 100th store (Vietnam GS25 Bekamax Tower) on the 1st floor of a landmark building in Binh Duong, Vietnam.

Vietnam GS25, which continued its opening in Ho Chi Minh at the beginning of its entry, has expanded its scope to the Ho Chi Minh satellite cities of Binh Duong and Vung Tau from the second half of 2020.

Vietnam GS25’s sales in January-February this year rose 46.7% compared to the same period last year, and opened 33 new stores in 2020 alone, achieving the steepest growth among brand convenience stores in Vietnam. It has about twice the appearance of convenience stores of leading overseas brands that advanced one year before the GS25.

From 2021, it is a strategy to expand franchise stores in earnest and open more than 100 stores per year in Hanoi, not only for internal growth but also for external expansion more aggressively.

GS25 utilizes the know-how that has grown into a representative franchise company that maintains the overwhelming number 1 in average sales per franchisee through management activities such as opening individual store revenue-oriented stores for more than 30 years, developing differentiated PB products, and expanding the convenience service platform in 2018. First entered Vietnam in 2008.

Based on its success in Korea, GS25 has appropriately applied a strategy to strengthen K-food in Vietnam, saying’the most Korean is the most global’ along with the localization strategy of’there is the answer to local customers’.

In 2020, the most sold products at GS25 in Vietnam were △instant cooked tteokbokki △mineral water △rabokki △banbao (steamed dumplings) △instant sausage. By properly fusion of Vietnam’s street food culture and the K-food craze, it was effective to operate a Korean food instant cooking corner in each GS25 store in Vietnam.

‘Cafe 25’, which is operated by almost all GS25 stores in Korea, also opened in Vietnam, and in January and February this year, Vietnam’s GS25 coffee sales increased 283% year-on-year. Sales also increased by 152%.

From 2021, GS25’s signature product, Strawberry Sandwich, was introduced in Vietnam, and it is hitting the highest sales every day.

GS Retail is analyzing that it has secured a distinct competitiveness compared to other local retail stores due to the high composition ratio of instant food and fresh food products in Vietnam’s GS25, and plans to further strengthen related products.

Meanwhile, GS25 is planning to expand into a global franchise brand by opening the first GS25 store in Mongolia in the first half of 2021, in cooperation with the second-largest business in Mongolia, with the help of Vietnam’s successful advancement know-how.

“Despite the Corona 19 situation, Vietnam GS25 continues its status as Korea’s representative convenience store in Vietnam,” said Seong-joon Huh, head of Vietnam’s GS25 company. “A successful case of overseas expansion that properly fits the thorough localization strategy and Korean food culture. It will become a global brand that expands to a wider variety of countries by utilizing it.