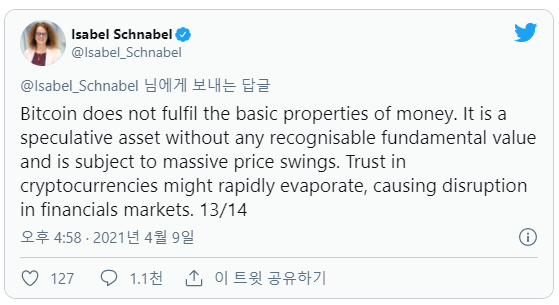 Isabel Schnabel, of the European Central Bank’s board of directors, criticized the cryptocurrency Bitcoin as not meeting the nature of money and could cause a collapse in financial markets. Coinpost reported this on the 10th.

In an interview by German weekly newspaper Der Spiegel, Schnabel responded to a broader theme of finance, his thoughts on the question,’Does Bitcoin (BTC) harm legal currencies?’

“Bitcoin does not meet the basic characteristics of money. It is a speculative asset and is affected by large price fluctuations as it has no fundamental value to know it. Trust in crypto assets will evaporate rapidly, which may cause a collapse in the financial markets.”

When an interviewer pointed out that'(in the comments above) Elon Musk would disagree,’ he only said, “I have the freedom to do that.”

Meanwhile, Plan B, known as the Bitcoin S2F (stock-to-flow) model, responded to Schnabel, saying, “People of Zimbabwe, Venezuela, Lebanon, and Turkey will disagree” (after the central bank adjusts its monetary policy on fiat currency). did.

In South America and African countries, where distrust of fiat currencies is growing due to hyper inflation, it is often reported that cryptocurrencies, including bitcoin, are spreading.

In February of this year, ECB President Christine Lagarde also spoke on Bitcoin. Against the backdrop of the size of price fluctuations, he said it is very unlikely that central banks of each country will hold bitcoin as a reserve currency anytime soon. In addition, in January, bitcoin was highly speculative, calling for the need for regulation.

See also  How should we evaluate the value of bitcoin, which is booming from time to time?

When asked,’Isn’t a currency like the euro have intrinsic value?’, he countered, “The euro is proven by the highly trusted ECB.”

In addition, the ECB is reviewing the digital euro of the central bank digital currency (CBDC), and plans to make a policy decision in the first half of 2021.

Schnabel said that while the digitization of the payment system is progressing, it is necessary to conduct an investigation, but (for the digital euro) nothing has been decided yet.

Meanwhile, in some countries, including China, CBDC is already in the stage of field testing. In addition, Federal Reserve Chairman Colin Powell said in February that the digital dollar is a high-priority project.

“People will trust the ECB more than Facebook and other private businesses,” Schnabel responded, to point out that the digital euro, which is still in the area of ​​review, is late.

“Nothing else can provide the same level of security and data protection as the ECB.”