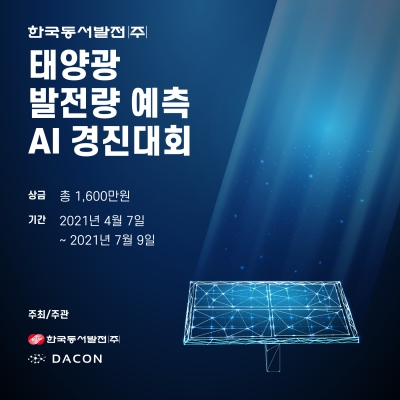 Deacon is a data science platform company for the Enabler, who was born in the first phase of the’K-Challenge Lab’ of the Gyeonggi Creative Economy Innovation Center, and is integrating artificial intelligence into the industry.

The event is hosted by Korea East-West Power and organized by Daycon. Participants will be evaluated by developing an artificial intelligence-based prediction algorithm that predicts the next day’s solar power generation based on the weather forecast data.

An official from the Korea East-West Power said, “We promoted to meet the government’s policy of expanding the supply of eco-friendly energy along with the efficient operation and management of renewable energy through the use of AI technology for solar power generation.” “We will introduce the technology to the E-Max service system of East-West Power’s power brokerage business to provide the nation’s best small-scale power brokerage service.”

Dacon CEO Kim Kook-jin said, “The goal of the contest is to develop an AI algorithm for predicting solar power generation based on weather forecasting through the application of a new methodology. He said.