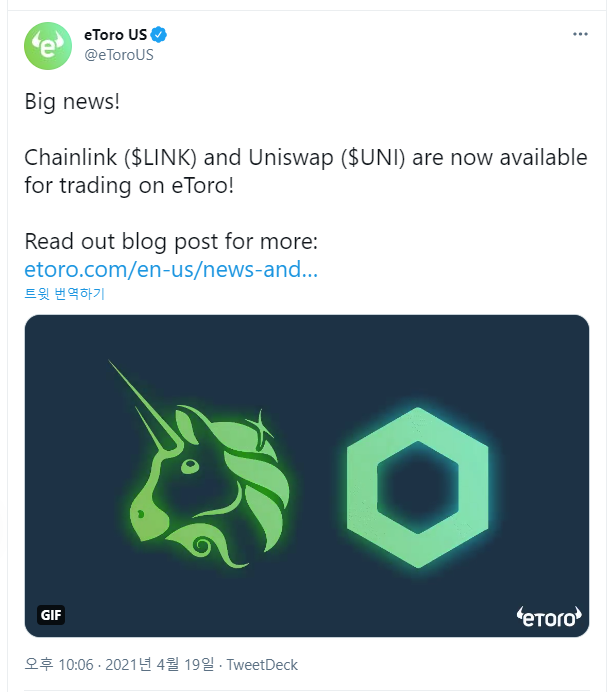 Israeli cryptocurrency trading platform eToro has added Chainlink (LINK) and Uniswap (UNI) to 16 tokens offered to individual investors. This was reported by Decrypt on the 19th (local time).

The move, announced today, represents Itoro’s support for Ethereum’s Decentralized Finance (DeFi) space, whose total value has soared from $800 million to more than $56 billion over the past year.

Both tokens are well established in the DeFi ecosystem. UNI, which was launched last year, is a governance token of the Uniswap decentralized exchange. In January 2021, the transaction volume surged to more than $30 billion. According to CoinMarketCap, it has a market capitalization of nearly $16 billion and is the 11th largest cryptocurrency asset.

LINK is the native token of Chainlink, a decentralized oracle provider that connects the blockchain to real data. It is located right behind Uniswap in the current cryptocurrency asset rankings, and has been one of the best performing cryptocurrency assets in the past year.

Itoro announced in March that it will be listed through a merger with SoftBank and FinTech Acquisition Corp, a $10 billion Special Purpose Acquisition Company (SPAC) funded by bank entrepreneur Bech Coen.

It has about 20 million users in 140 countries, including the UK, Australia, Germany and Switzerland, and was expanded to the US in 2018.

In particular, Robin Hood, a competitive trading platform, is highly evaluated, reaching $40 billion, but has 7 million fewer users than Itoro.

(The first two tokens added to crypto brokerage eToro this year are Chainlink and Uniswap—both stalwarts of Decentralized Finance (DeFi).)