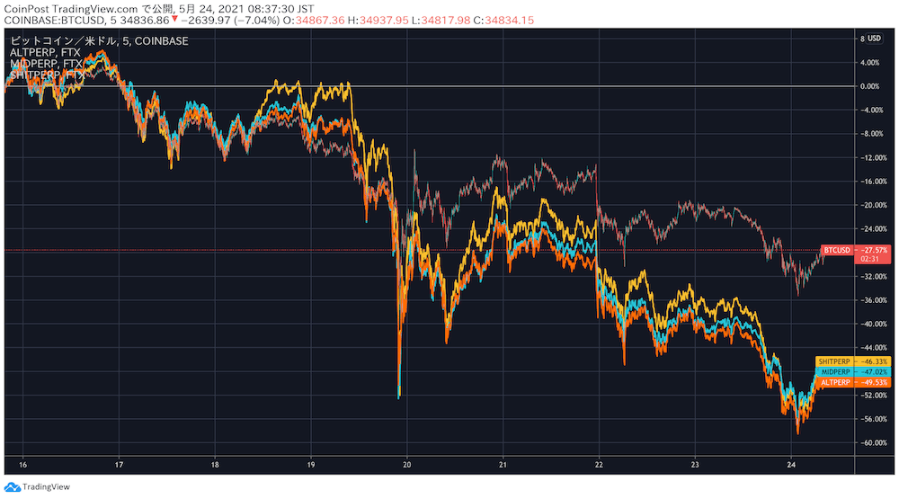 CoinShares, a large UK investment company that provides cryptocurrency exchange-traded products (ETPs), has released a weekly report on the digital asset market. We analyzed the cryptocurrency financial products provided by the company. Coinpost reported this on the 25th.

It reported that some funds had flowed into certain altcoin funds, which had a higher rate of decline through Bitcoin and Ethereum funds for a week until May 24, when the cryptocurrency market fell.

Bitcoin (BTC) and Ethereum (ETH) fell sharply, exceeding the level of about 50% decline from the once high. As the market cap of the small cap was approached, a significant outflow of funds was observed. While the movement of funds from market prices has also been shown, according to the data, it is possible that the funds of institutional investors were directed toward altcoins, which are considered to be low-priced.

There is a concern that Tesla’s suspension of use of bitcoin payments is known, as well as the Chinese authorities’ policy to regulate bitcoin mining and transactions, and concerns that the problem of mining energy consumption of PoW-related items such as bitcoin will spread to U.S. listed companies related to cryptocurrency. The back has been the center of the market price.

During the sharp decline, the outflow of funds from CoinShares’ Bitcoin and Ethereum funds was also massive. According to the data, about $1.11 billion (about 124.6 billion won) of Bitcoin and $12.6 million (about 141.5 billion won) of Ethereum were leaked, and the Bitcoin Fund surpassed -100 million dollars for the second consecutive week. In Ethereum, this is the first negative level this year.

Cardano (ADA) +10 million dollars (approximately 11.2 billion won) was the significant inflow of funds by altcoin. It was followed by the basket-type fund “Multi Asset” and Polka Dot (DOT). Although it is said that it has flowed into various altcoins, as a whole, a total of $97 million (approximately 108.9 billion won) has been leaked, and the outflow of funds has accelerated to double the level of about 55.8 billion won last week. have.

Not only CoinShares, but also ETC Issuance, a cryptocurrency investment company that provides cryptocurrency ETP products in Europe, was confirmed to have a fund outflow, resulting in an outflow of 22.8 million dollars (approximately 22.6 billion won). During the week, the inflow from major funds was -97 million dollars (approximately 108.9 billion won).