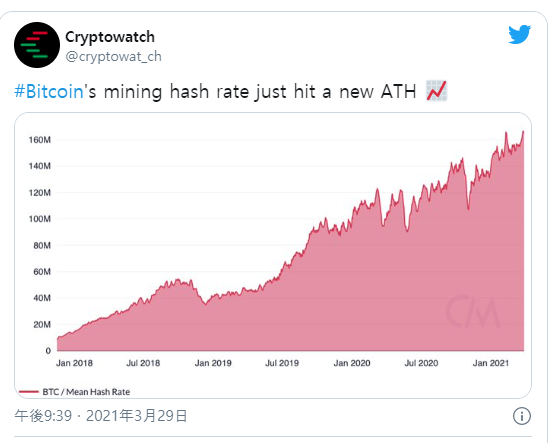 Bitcoin (BTC) prices soared to $58,877, +2.53% from the previous day. It was a good thing that a large US payment company PayPal started online payments using cryptocurrency for US users. Coinpost reported this on the 31st.

On the 29th, the successive advances of large companies are improving the market situation, such as the adoption of USDC payment, a stablecoin by Visa, a large payment company, is confirmed.

The hash rate is an indicator of’the ability to calculate in seconds’. The rise of the hash rate means that the robustness of the BTC network has increased, in addition to showing the mid- to long-term strong stance of large miners (miners) expanding operations against the outlook of the cryptocurrency market.

Typically, hashrate increases include multiple factors such as improvement in the market environment, sales of new machines by mining equipment companies such as Bitmain, the impact of the Chinese feng shui season (improvement compared to the cost of electricity bills), and participation in large pools of new companies I can.

The feng shui season in Sichuan, China, where mining is in full swing, is expected around May or October. After the Feng Shui season, many mining companies can reduce the scale of their business by moving their bases to Xinjiang Uighur Autonomous Region, Neimung-gu, or overseas, or shutting down the equipment at the mining site.

Binance Coin (BNB), the third-largest market cap, rose +11.46% from the previous day to recover to the $300 range. Since the beginning of the year, the fluctuation rate has exceeded 660%.

The announcement of TokoCrypto (TKO), the 19th project, was announced at Binance Launchpad, an Initial Exchange Offering (IEO) platform. Tokocrypto (TKO) is the Indonesian exchange’s own coin established in 2018. TKO is Indonesia’s first local cryptocurrency, and with TKO tokens, you can receive various benefits including discount on transaction fees.

In the token sale, a snapshot of the BNB balance will be held from “March 31 0:00 to April 7 0:00” according to the new subscription format. The maximum amount of commits for token allocation is interpreted as the increasing pressure to buy BNB in ​​order to meet the average BNB holdings over the same period.

IEO is attracting attention as a new financing method using cryptocurrency that the exchange acts as an intermediary.

In pancake swaps, BNB is required to generate currency pairs in’liquidity mining’ with high annual interest, and in addition, by depositing BNB, the supply-demand advantage is also added.