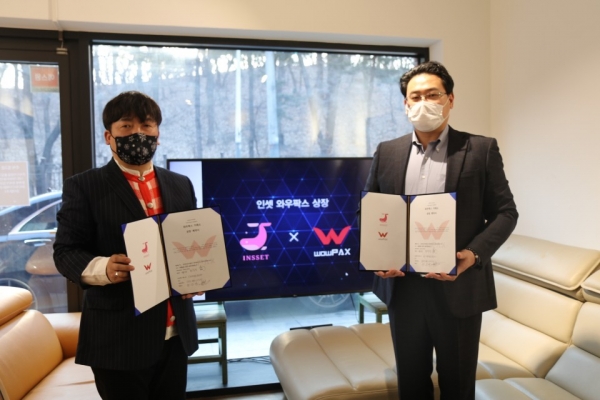 Anex Korea announced on the 9th that it has signed a listing contract for its medical information integration service token’Inset (IST)’ with the’wowPAX’ exchange. The listing date is 16:00 on February 18th, and it is news of additional KRW listing since last December’s’Forblegate’ exchange. At the signing ceremony, Anex Korea CEO Hwang Eun-yeon and Wowfax Change CEO Jung Woo-geol took place.

Anex Korea’s DApp project’Inset (IST)’ is a patient-centered medical information integration platform (MIIP), a medical token based on ERC20. The company’s next-generation network security technology is applied to fundamentally block the leakage of patient’s personal information and provide a safe medical environment from hacking. In addition, through blockchain technology, a patient-centered medical information sharing ecosystem will be created, and expansion to various fields such as beauty, health, tourism, and bio is expected in the future.

‘WowPAX’, the second listed exchange of’Inset’, has formed a consortium with related companies as the special laws that impose anti-money laundering obligations on virtual asset providers come into effect on March 25. We are making every effort to provide a safe trading environment, such as signing an escrow agreement for the customer’s investment.

Anex Korea, as the project foundation of’Inset (IST)’, is preparing for listing commemorative events and generous New Year’s prizes as it signed a contract with the Wowfax Exchange. Information on the event can be found on the Anex Korea website (anexkorea.com) and the Wowpax Exchange (wowpax.io).

Meanwhile, Anex Korea is currently conducting a’Digital Asset Storage (FinOpHub)’ pilot project in Busan, a special block-chain zone, and plans to introduce’DONO’, a warm wallet with network separation technology that prevents hacking from the source in the first half of this year. to be.