Analysis of the cryptocurrency market on the 6th. - BLOCK REVIEW 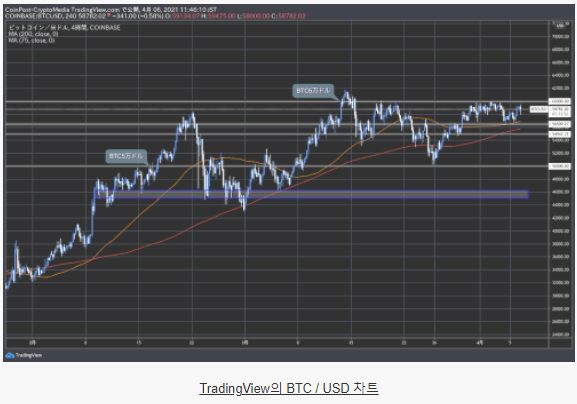 Coinpost reported on the cryptocurrency market on the 6th. The price of Bitcoin (BTC) is $58,896 (based on coin market cap), +1.10% compared to the previous day.

The total market capitalization of cryptocurrency exceeded 2 trillion dollars. As the inflow of funds into the DeFi (Decentralized Finance) market, which has emerged since June of last year, has accelerated, including Bitcoin, Ethereum (ETH) and Binance Coin (BNB), the second and third largest market caps, led the market.

In addition to expectations for the progress of the US SEC (Securities and Exchange Commission) trial (XRP investor litigation intervention court approval, and acceptance of confidential requests for Ripple documents), most recently, shares of Tranglo, a company related to re-listing of XRP or remittance settlement The acquisition agreement of 40% of the total was also materialized.

BTC dominance (share), which represents market share, plunged to 57.1% at one time during the intraday. It was in the 63% range in mid-March, but fell sharply due to the boom of altcoins. Currently, it is below the lowest level in September 20th, the level of June 19th.

While the conventional phenomenon of the alto season has become clear, there is also a difference from the cryptocurrency bubble of 2017-2018. It can be said that the sharp decline in dominance as Bitcoin continues to trend toward high prices suggests an inflow of funds from outside, not just money movement.

In the background of large-scale holdings, concerns over inflation of legal currencies such as the “US dollar” accompanying large-scale financial easing are at the root. It seems that they are interested in bitcoin as an alternative asset because the value of cash decreases relatively when inflation rises.

Robert Kiyosaki, famous for the author of’Rich Dad Poor Dad’, points out that this is based on the devaluation of the dollar due to financial easing and the future instability of the US economy, rather than the power of Bitcoin itself.

Representatives from 6917 companies inundated at the “Bitcoin for Corporations,” a briefing session on bitcoin for businesses, hosted by Michael Sailor, CEO of MicroStrategy, in February of this year. Companies showed high interest. This event was a practical content to explain the practical tasks that companies face when holding bitcoin on various topics such as finance, law, accounting and tax.

In the Korean market, the kimchi premium (price gap with overseas exchanges) continued to grow and exceeded +17% at one time. When the positive gap under certain conditions grows, it evokes the demand for arbitrage transactions.

According to Larry Prelude (@lawmaster), when the premium occurred in 2017-2018, it expanded to nearly 40% (up to 54%), but it ended in a month or so with the collapse of the cryptocurrency bubble.

Since 2018, the tether problem has emerged, and the speculation fever has rapidly declined as the spirit of global regulatory reinforcement has increased along with large-scale hacking incidents such as ICO problem and coin check.

Referring to coinlib’s data, the inflow of Korean funds was also confirmed during the XRP surge over six days.

The post Analysis of the cryptocurrency market on the 6th .. The market capitalization of cryptocurrency is $2 trillion, bitcoin share, etc. appeared first on coin code .