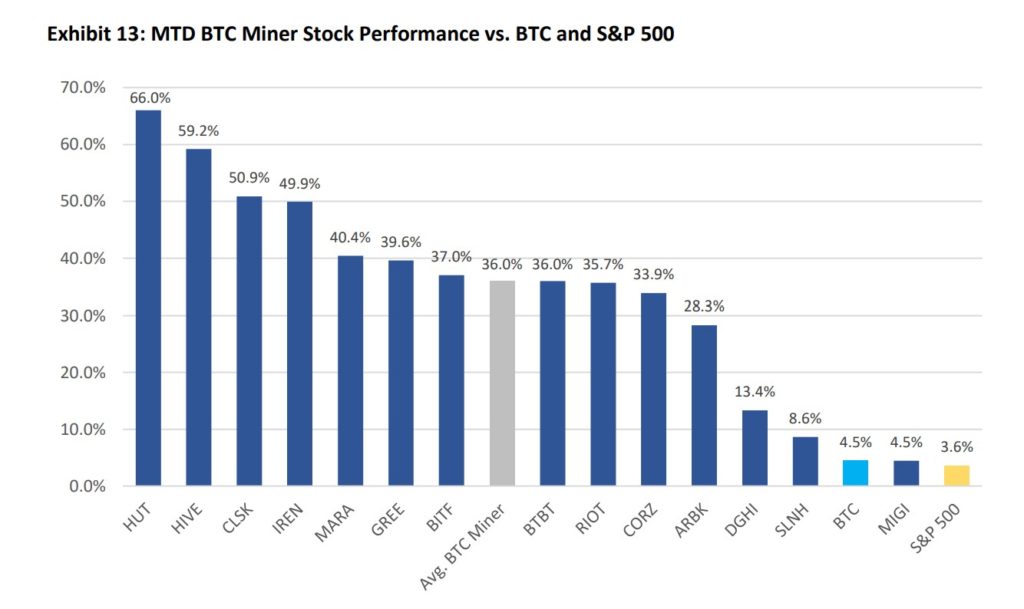 It’s been a welcome reprieve in the markets recently, following a torrid first half of the year.  However, one sector’s bounceback has been especially strong.

Bitcoin mining stocks have surged the last couple of weeks. The below graph from Mike Colonnese of HC Wainwright quantifies the move – the average Bitcoin mining stock jumped 36% in the first two weeks of August, in contrast to a 4.5% move in BTC and a 3.6% increase in the S&P 500.


The wider positivity in the market has been well covered. CPI data eased this month to 8.5%, coming in below expectations of 8.7%, and with the current environment hyper-focused on inflation readings and the corresponding Fed responses, that is positive news in itself. Additionally, within cryptocurrency circles, the news of Coinbase partnering with the institutional investing king that is Blackrock has caused Bitcoin to climb higher and flirt with the $25,000 mark (although some analyst forecasts were well north of this, as I covered here last week).

Then again, if we step back a bit here, does it make sense that mining stocks are rocketing to such a degree? I published a piece a week ago looking at the rising electricity costs that were squeezing miners.

With the geopolitical climate driving headlines as a result of the surge in gas prices, electricity has also been on the up. Focusing just on Europe, the European Power Benchmark averaged 201 €/MWh in the first quarter of 2022 – that is a rise of 281% compared to the same quarter in 2021

Certain countries were even worse. Spain and Portugal jumped 411%, while prices in France rose 336% and Italian prices were the highest across the EU at €249 per MWh, a 318% rise from a year earlier.

And yet, we are seeing these stocks pump so excessively now? And with Bitcoin – which is obviously miners’ revenue – still down close to 50% on the year?

Well, the answer lies in the difficulty of the mining network. With these aforementioned operational costs rising and miners’ revenue falling, the smaller miners have really felt the pinch. With many closing up shop, the mining difficulty has dropped to a five-month low, painting a rosier picture for those who remain – as I plotted below.

However, despite the welcome reprieve, a check-in on the bitcoin reserves of mining pools betrays the struggle it has been this year thus far. I plotted these balances over the last 6 months, and it’s pretty clear that an abrupt reversal occurred on May 9th. What happened on May 9th? Well, a coin by the name of UST launched a death spiral of epic proportions, kicking into motion the contagion crisis which rippled across the industry – there was no escape, and certainly not for miners.

It is interesting that despite the market turning green in the last few weeks, these balances have not increased. While the data is only up until July, markets began their rebound last month. Indeed, it is a point that is captured in Colonnese’s report also, as he presents below the graph showing that the sales of bitcoins from miners remained elevated in July. The data from company filings for August, should the market stay green, will be interesting to assess whether there is a change of tune here.

With markets green and Bitcoin rising, mining stocks jumping up at a more explosive pace is exactly what we have seen previously in the market – bitcoin mining stocks have shown themselves to be a higher-beta option very much correlated with the price of Bitcoin.

With Bitcoin still enduring an abject year as a whole, down 47% despite the recent pullback, mining stocks are worse -trading an average of 59% below the prices at which they opened the year at. Again, they are high-beta stocks correlated to Bitcoin – so in the context of this, it makes perfect sense.

So, with crypto as a whole still suffering from a morning-after headache following the Terra-fuelled contagion crisis and the Fed’s removal of market-wide liquidity, it’s important to remember how high-beta a lot of these mining stocks are.

Sure, the landscape YTD has been dire, with prices reflecting that. But the last few weeks show that once that bottom is hit, the bounceback gains on offer here will be outsized. The real question, as I covered in my first article of the week this morning, is pinpointing when exactly that is.