Over 12,000 Influencers Can Again Earn Tokens for Social Media Activities

Los Angeles, Feb. 23, 2021 (GLOBE NEWSWIRE) — (via Blockchain Wire)  AirWire, the multifaceted cryptocurrency platform has been relaunched under a beta release. Included in the platform’s release are its incentivized task protocols and social media transmission technology that allow influencers to earn tokens through the education of sponsored texts and share those texts via social media.

AirWire is a pioneer in rewards, earning, and crypto mass-adoption technology. In 2019, the company had to temporarily close its doors due to capital challenges and changes in the management team. With the support of Alpha Sigma Capital and other investors, Ken DiCross, the founder and CEO of Airwire, has led AirWire into 2021 with the vision and path set forth when they first launched in 2018.

“After completing the acquisition of AirWire assets and forming a new company with Ken DiCross, Alpha Sigma Capital then arranged for a Seed Round with a friendly angel investor that has supported AirWire in the past,” commented Enzo Villani, Founder and Chief Investment Officer of Alpha Sigma Capital Fund, LP.

As AirWire has come back online, the company has confirmed its over 12,000 registered users, 7,800 fully compliant registrations that abide by international KYC (Know Your Customer) rules, over 80,000 prospective users, and 15,000 plus followers across Discord, Telegram, and Twitter.

“The shutdown was not due to the efficacy of the platform, rather, capital and management issues,” said Ken DiCross. “With those issues resolved, we look to add to our dynamic platform. The future roadmap for AirWire is an aggressive one. We have designed an ecosystem with 2021 and beyond in mind. Influencer, Shopping, Defi, and a few more portals will help create a competitive advantage that will lead us into a new growth phase.”

All former users and account holders are now able to access their accounts and wallets on the platform. In the first half of 2021, AirWire will conduct a swap for the classic WIRE tokens in order to facilitate a migration to its new blockchain protocol, currently under redevelopment, migrating from the original PIVX blockchain.

Ken DiCross added. “The WIRE token will always be featured in the AirWire platform. In addition, the platform can facilitate the creation and adoption of other tokens and cryptocurrencies including NFTs that can be obtained via activities such as staking and earning.”

AirWire Network is the pioneer in rewards, earning, and crypto mass-adoption technology. Their SaaS platform provides digital assets the ability to provide rewards for activities, including an ad-based model. In addition, users have the ability to transmit tokens directly and securely through text, email, QR code, social media, or custom links, utilizing its Patent Pending technology. For more information visit www.airwire.io

Disclaimer: This press release is for informational purposes only. The information does not constitute investment advice or an offer to invest. Tokens and virtual currencies, in general, are not legal tender, in any country, and are not backed by any government as legal tender, nor should they be treated as such. 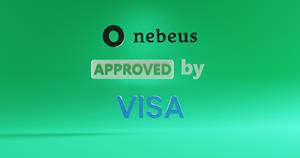 Nebeus Gets Approval From VISA for Withdrawals in FIAT and Crypto